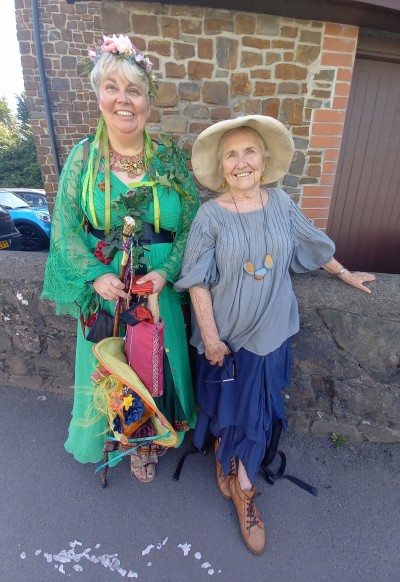 It’s blackberry season and the brambles here are allowed to ramble. I’ve had my eye on a patch close by but, alas, due to the extreme heat and lack of rain, they are not worth picking.

With only have a few weeks left of my residency, I feel I am almost a local as I wander around the town. I know all the back alleys, where the best coffee is and where to get free advice on my phone and computer. I think being a grey-haired lady with an Aussie accent helps, but people are surprised I am not used to the heat; in fact, I hate it. They find it hard to believe we have more snow in Australia than Switzerland but, when I show them a photo of my daughter skiing at Thredbo last week, they are convinced.

I am on nodding or smiling terms with some of the regular characters around town; like the South African man selling the Big Issue outside Marks and Spencers in the High Street. His wife talked him into coming back to England to live, then dumped him. But he is still smiling and up for a chat.

Then there is the homeless man who sits in the lane on the way to the library. He has a big smile, whether or not you give him something and says ‘Have a luverly day my luverly’. Passers-by keep him fed and I always give him change and a smile. There are also a lot of seniors around here who cruise the streets in their mobility scooters, often riding side by side having a chat. Totally oblivious to pedestrians. You learn to dodge them and wouldn’t dream of chipping them. Just as well I am still pretty nimble.

There have also been a number of memorable visits out of town. The Green Man Festival in Pilton, a charming village, now an extension of Barnstaple, was very special. The sun was shining and I joined thousands visiting the old church, graveyard and school, and watching the parade and re-enactment of the Green Man legend. Typically, I got chatting to a few women taking part (see photo).

The North Devon Show about eight miles out of town was also a wonderful day out, the highlight for me was seeing sheep breeds I had never seen before and talking to farmers. Other outings included a visit to Sudderley Castle in the Cotswolds, and a few days in Plymouth. All research trips you understand!

On the writing front I continue to go to the writers’ group at the library, the book group that meets at the Imperial Hotel (the poshest in town where it is £5 for a cup of coffee). I also went to Bideford and met up with fellow historical writer Liz Shakespeare who is well known in North Devon. We will stay in touch as we have so much in common and are writing and researching the same period of history.

In the next few weeks, I look forward to visiting a few close by towns and catching up and saying farewell to the many friends I have made.

For me, this experience has been all and more than I expected, and allowed me to stand back and assess where I want to go with my personal and writing life. I would highly recommend it to any SWW members thinking of applying for next year’s residency.

See some of you next month and at the October meeting at the Mitchell Library in Sydney.

Thank you to everyone who responded to my last postcard. 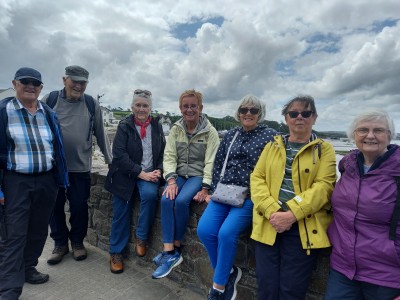 I have now been here more than six weeks, during which I’ve been busy getting to know people and places. Also doing a lot of walking. Some of you commented that I seem to have made friends quickly. As well as being a lifelong nosey parker (sticky beak) people watcher, and explorer I also made contact with the local U3a (University of the Third Age) before I left home.  I am a member at home and I was warmly welcomed by local people and attended their quarterly lunch a week shortly after I arrived. Since then, I have joined the literary circle, the strollers’ group and taken part in their open day last week to help recruit new members.

I am doing quite a lot of walking but decided to try out the entrance level walkers first. Figured the Ramblers (lovers of hills and dales) and the trekkers (intrepid mountaineers) was not for me. Just as well as my first stroll was at Instow on the River Taw. The “stroll” was actually a two hour walk on even ground followed by lunch at a local pub. Much more my style.

Afterwards the leader, Pam, took me in her car to see the towns of Bideford, Appledore and Westward Ho. The latter was the home of author Charles Kingsley who was visited from time to time by his friend Rudyard Kipling. Sadly, Westward Ho has become a hideous holiday town with high rise flats and rows and rows of monotonous chalets. Each little town is different and being a passenger, I have the luxury to enjoying the rolling hills and lovely old villages as we drive through the countryside.

Several weeks ago, another member who has become a good friend, Sue Thomas took me to the National Trust property Arlington Court, about half an hour away. It was a magnificent day, visiting the house, the carriage museum and best of all the walled garden where I spoke to some of the volunteers. As I volunteer in the garden at Harper’s Mansion in Berrima it was good to swap notes. I always keep my Australian National Trust membership up to date so I have free access to NT properties here.

So, with all this activity am I getting much writing done? I am, but not a lot as I am spending time at the library doing more research and talking to some of the local historians. So much so that I have developed several new characters from this area for my book. One is based on a real character who lived in Greater Torrington which is about half an hour from Barnstaple. 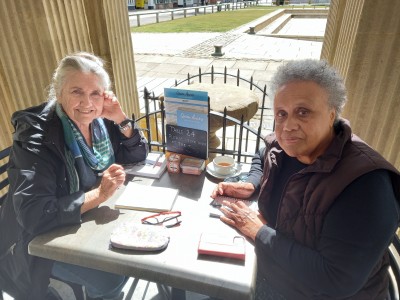 You guessed it; no sooner did I mention my new character than a day out was planned for me by two of my new friends. We had an amazing day in Great Torrington, famous as the site for the final battle of the English Civil War between the roundheads and the cavaliers. The local people supported the cavaliers so Cromwell’s men blew up the local church which resulted in hundreds of deaths. For those interested, contact Google for the Battle of Torrington 1646. GT was also famous worldwide for making gloves.

The local museum was a great source of information and the guide said that when many more people turned to gardening during Covid more 1646 cannon balls were dug up as people dug deep into fallow ground!!!! Mmmm.

Afterwards we went to the Royal Horticultural Society Garden, Rosemoor, a few miles out of town. What a treat. I was able to wander around this place for several hours on my own. Bliss; I could have stayed there all day.

I have joined the monthly writers’ group at the library and met some very talented people, three of whom read out part of their work for critique. I look forward to going again.

One of the unexpected benefits of this residency is having the time to read uninterrupted by daily life. While here I read the second book The Heron’s Call by Ann Cleeves, set around Barnstaple. Knowing where things are and having visited some of the towns mentioned made it very enjoyable. As Di Yerbury also has hundreds of books here in the flat there is no shortage of reading material.

In my last postcard, I mentioned I had met and planned to interview the Melody Appleton the author of Go Home Blackie, living in England in the 1950s and 1960s. I spent several hours talking to her recently and we have become firm friends as we have much in common.

Given Wimbledon is over and the political crisis is on the slow boil, I am hoping to having a quieter week, but given the Green Man Festival nearby Pilton is on here next Saturday and the North Devon Show in two weeks, there is no shortage of further distractions.

Di Yerbury grew up in Pilton and many of her ancestors are buried in the local church so I will certainly visit it and some of the places Di explored as a child.

By the time you read this, this year’s applications for the Di Yerbury Writer’s Residency may have closed. If not and you meet the criteria, do think about applying as it is a great opportunity.

I am now in the second week of my three-month residency and really enjoying the freedom to write and explore this interesting old town. The first week was spent settling in and working out where essential food services etc. could be found. These are all located with walking distance so am clocking up quite a few kilometres on my fitbit watch.

I was delighted to find a real green grocer which sells fruit and vegetables grown on their own farm not far from town. As a keen gardener, I am enjoying my chats with the owner, discussing what is grown here and what is imported. Blueberries from Morocco but local strawberries are divine. Was also tempted to buy the famous Devon clotted cream made by a local creamery. I succumbed.

I am not a great fan of chain coffee shops so as I wander around the town I am discovering little coffee shops in alleys and off the beaten track. This has led to new friendships and good coffee, with a story around every corner. So far, all these little gems, with the exception of the green grocer, are run by vivacious and enterprising women. I warm to them and give them my business. In return they introduce me to other women and new stories.

Last week I wandered into an arcade and a recently opened shop called Black Street London Afrocentric (yes, another enterprising woman) which promotes artists and writers from a non-white background. As it happened they were having their first book launch last Saturday and invited me to go. I met a most interesting writer, Melody Appleton who has written Go Home Blackie, Growing Up Black in Britain in the Fifties and Sixties. I am meeting up with her next week to do an interview so watch this space.

“Do I detect a slight accent?” people say. It appears I am starting to slip into my original English accent so they are not sure if I am Australian. They are delighted when I say I am. This is a very Anglo town and I haven’t noticed many people from diverse backgrounds so far.

I am working on an historical fiction set in England, so high on my agenda were visits to the local museum. Been twice so far and connected with the curator, another enterprising young woman. Also joined the library and will return to check out their history collection today. It is looking like I might need to conjure up a character from Barnstaple for my story.

We are so lucky our Patron Di Yerbury has made this accommodation available for women writers and I hope others will enjoy it in the future as much as I am now.

Enough for now. Be in touch next month.